Travelling through Beirut as the Hezbollah seized parts of the city, Carl Shukers New Zealand passport allowed him to pass across borders like a ghost. Nine years on, he remembers glimpsing a political shift that reverberates today 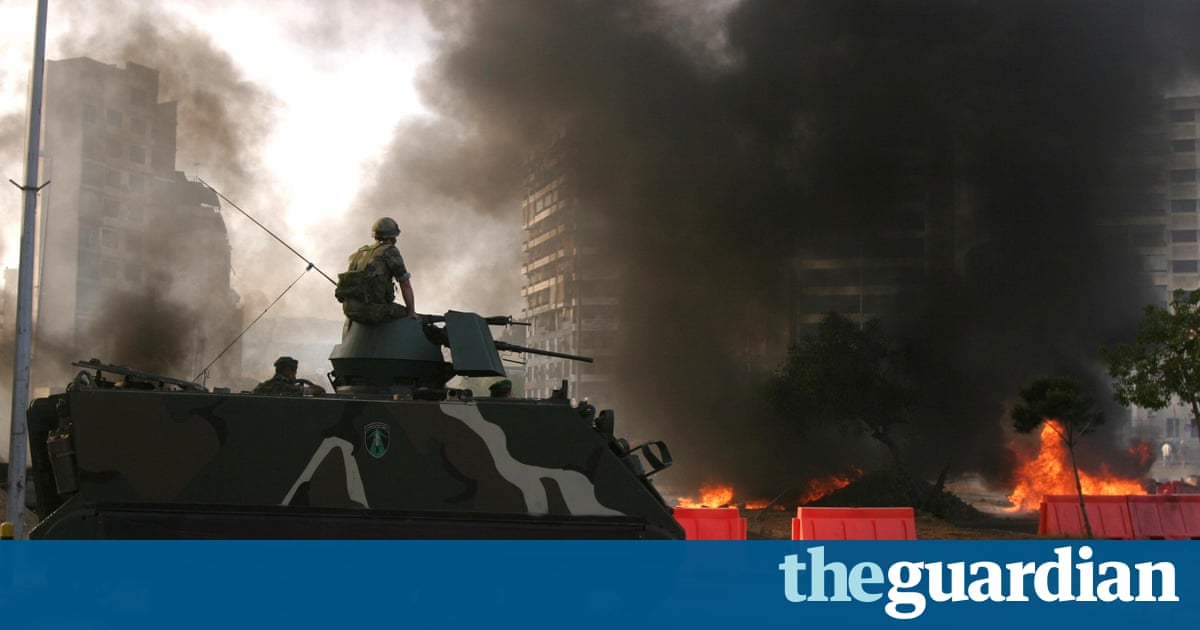 From the balconies in east Beirut we looked toward the west, listening to the gunfire. It was the third night of the conflict and we were locked down in a hostel. All the foreigners had the same fixed grins, drinking Almaza beer, sharing cigarettes and furtive trips through the dead streets to ATMs for emergency cash. The owner was an old, bald Christian, and his family had arrived to support him a son and daughter-in-law with a baby, various aunts.

We all holed up together in the lounge, flinching at the gunshots and checking our emails. As the old Christian drank, he got playful. Soon he dressed up and began to dance. He put on a red fez, and pulled out a plastic cat o nine tails, before dancing around the room, playfully whipping himself, moaning merrily in imitation of the Shia festival of Ashura. His family applauded. It was the whole Lebanese farce enacted for us. Over six days in May 2008, 84 people were killed and nearly 200 wounded.

It became known as the little war. The Shia militia Hezbollah was taking over most of west Beirut by force of arms after government encroachment on their private telecoms network and the firing of their security chief at Beirut airport. As we sat and smiled at the Christians little play, Hezbollah was adjusting the physical and political map outside.

This was eight years ago, before the Syrian civil war. Now there are 1.5 million Syrian refugees in Lebanon, as well as half a million Palestinian refugees. Between 2011 and 2014, about 34,000 paperless and stateless Syrian babies were born in Lebanon. This means, with a population the same as my home country New Zealand (4.4 million), more than one in three people in Lebanon is a refugee the highest per capita refugee population in the world. The last time this many refugees entered the country about half a million Palestinians after 1948 Lebanon held on for a long time before the 15-year civil war savaged it beyond recognition.

Beyond recognition may be a a cliche, but it is also the truth. Lebanon is a thousand-year evolving project. The Lebanese are fiercely proud of their country but at the same time, its compromises, volatility, shockingly porous borders and corruption are sources of embarrassment and great dismay.

When I got out of Beirut during the little war, I did so jammed in the back of an ancient Buick taxi with six or seven others, including the Danish boyfriend of a girl studying in Beirut who stayed on. Ironically, we fled into Syria. A merry Lebanese businessman from Kuwait bribed a Syrian border guard for us, then promptly took us all to dinner.

With my New Zealand passport, I could cross the border quite easily, like a ghost and I did. I think about the businessman and the border guard often. That kindness, where they are now, what that Syrian guard has done as his people passed the other way. I saw the Danish boy from the taxi in Damascus a day later, wearing a yellow Hezbollah T-shirt. Who did he think he was? Who did I think I was?

When I crossed into Israel a few days after leaving Syria it was via the Allenby Bridge, over the few metres of sludge that comprises that part of the Jordan River. A Jordanian shuttle bus dropped us at a large kiosk near the bridge, where we were asked if we wanted our Allenby visas stamped on a piece of paper rather than our passports, so we might discard them if we ever wished to enter an Arab country. We were then ushered on to a huge, plush Mercedes bus to drop us on the Israeli side. On the mesas above us, ragged plastic bags opaque with age were snagged on the razor wire, flapping in the wind like flags.

The foreigners and the Arabs were divided into different streams. Because of my travel history I was questioned at length by Shin Bet. Id seen them handsome young men and women, in cargo pants and polo shirts yelling at the ancient Arab grandmothers lugging heavy plastic jerrycans of Zamzam water back from the Hajj. When did you come to Lebanon? Who did you meet there? Why did you go to Syria? The questions circled and returned, always politely prefaced with: Im sorry we have to ask you these questions. The Arab queues were Boschian; soon, I was eating schnitzel in Tel Aviv.

In Lebanon, under pressures we cannot imagine, there remains for now a kind of peace. But foreign aid is falling. The numbers of unregistered refugees are growing. Isolationism will not help those 34,000 babies, those true citizens of nowhere, and they will grow up.

The great Lebanese experiment is often seen as a bellwether for the Middle East and the world. In some sense, and the long view, it is an experiment of continually searching for the compromise that prevents conflict searching for a citizenship of something higher. Coexistence. In Lebanon, one of the fundamental conditions of that experiment is simple proximity they recognise the true imperatives of a situation where we have to live together. We might learn from that, and help.

The author is donating his fee for this article to The White Helmets. Citizens of Everywhere is a project by the Centre for New and International Writing at the University of Liverpool. @CitizensofWhere #CitizensofEverywhere